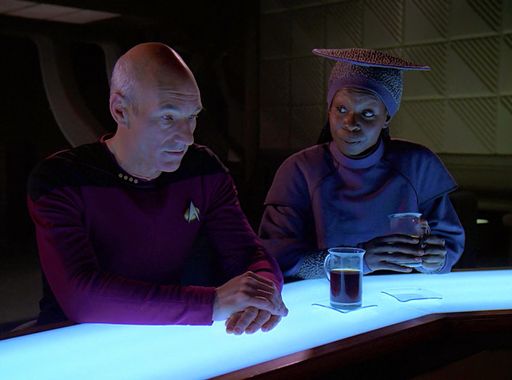 This post contains spoilers for the TV show “Picard”

Star Trek: The Next Generation, and its follow-ups, Deep Space 9 and Voyager, are some of my favourite TV shows. They are set in a future post-scarcity utopia where poverty, disease and war (amongst humans and most of the alien species they encounter, at least) have been largely eliminated.

Although they sometimes deal with deep topics, like the humanity or personhood of artificial intelligences, the economic reality of their universe and how it came about goes largely unexamined. There is no money, we are told (except sometimes, when there is). There is property, apparently, but whether it works the same way as property does today is not discussed. Abundant energy and the technology to conjure most of the essentials of life from thin air mean that nobody goes hungry, but whether everybody can have the opportunity to own a vinyard in France without inheriting one is a question that goes unasked.

The utopianism is usually established instead through a gentle mocking of the preoccupations and vices of present-day society, or lecturing about how humanity has moved past them. A bemused Picard takes a cigarette offered by a 20th century character on the holodeck, and coughs aggressively. Imagine smoking! Even the Ferengi, themselves caricatures of grubby, grasping capitalists, are shocked at our stupidity when they learn about tobacco. Janeway lectures the omnipotent Q about resolving conflicts with diplomacy instead of violence. An arrogant 20th century revival is revealed to be a buffoon when he demands to be allowed to speak to his lawyer. No lawyers here sir - this is the lawyerless utopia of Lionel Hutz’s nightmares.

Occasionally the admonishment is more direct - such as when Sisko time travels to a ghetto in a North American city, in our near future, looks directly into the camera, and says “sort your fucking shit out”.

The point is that in the Star Trek future, society is better than it is today, but its material basis is vague to the point of absurdity. It’s unfortunate, because that would be an interesting topic to explore, but it is what it is - light-hearted science-fantasy more concerned with the personal growth of characters than with the economic basis of their society.

Star Trek: Picard, the latest attempt at continuing the Star Trek franchise on television, is set, in contrast to its predecessors, in a fractured, broken society. The Federation has turned inward, failing to live up to its values of diplomatic and humanitarian outreach. Money has returned with a vengeance, and nobody does anything unless they’re getting paid. There’s a disaffected, under-appreciated working class, who apparently don’t even get the same quality of replicators as other sections of society. Where characters in other series’ have interests and hobbies, in Picard they have vices, addictions and psychological damage. One character constantly has a fat cigar hanging out of his mouth and nobody is shocked about it because he looks, just, so cool.

In a show without an established universe, these aspects would be unremarkable - just a different set of assumptions about human nature and the future development of society, and with different stories to tell. In Picard, the departure from the previous utopianism is not examined, much less explained, and it is jarring.

But the above examples are trivialities compared to a problem that is at the very heart of the show. Toiling alongside the human workers are a class of sentient android slaves whose abolition and genocide by the Federation serves as a major plot motivator.

More than a Fistful 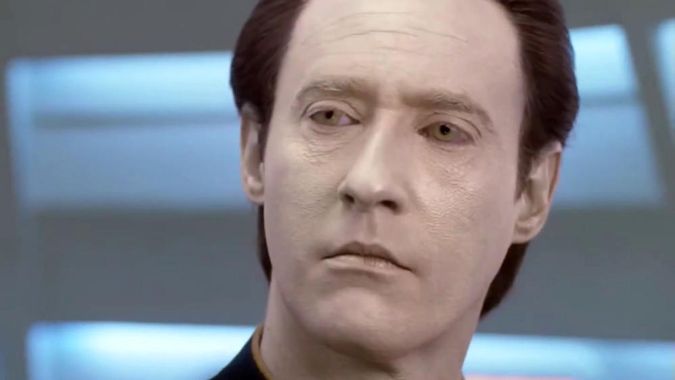 These are the “Datas on every starship” that Maddox expresses a desire for in the TNG episode “The Measure of a Man”. In that episode (one of the best in the Star Trek canon), Picard defends Data’s personhood and his right to self-determination. He’s ready to sacrifice his career over the possibility that his society would view even one android as property. In Picard, the same character disagrees with the ban on “synthetics”, but hardly comments on their genocide, or their previous condition of slavery. He quits Starfleet over their failure to provide humanitarian aid to the Romulans, not over the fact that the Federation had somehow come to rely on slave labour. Apparently, he would be perfectly happy to return to a situation that he fought to prevent when he was Captain of the Enterprise.

It’s a disappointing missed opportunity. It seems to me that the show wanted to say something about the socio-political situation in America today, but utterly fails to understand that situation, the shows that came before it, or the character of Picard.

If it really wanted to portray the dissolution of a utopia, a crumbling society betraying its ideals, it could have done so by clarifying the nature of the Federation economy, and provided some systemic explanation for the introduction of slave labour, money, and inequality, where those things did not exist before, or at least some believable political force pushing for those things. Picard could have been cast in the role of defending the fundamental rights of the Androids from a society that is determined to exploit them, as he has many times in the past. Perhaps he could even have taken on the new role of defending the rights of human labourers, whatever the reason that they’re suddenly being disenfranchised. It could have been a great opportunity to introduce some economic depth to the Star Trek universe that has long been lacking.

Instead, we get a complete mess where exploitation is ignored, the dissolution of Federation society is apparently due to infiltration by an inherently sinister other, and the androids are the ultimate villain for not being sympathetic to their oppressors or being understanding about the genocide of their race.